Excellent preparation for the upcoming CQ Contest WXP two January's contest. First, HA DX Contest, held 17.-18.January 2009 From 12.00 to 12.00. It is possible to forge links with all, only the Hungarian stations. They are, however, better point-rated and also provide multipliers – Hungarian field. Given the short distance to directly offer category SOSB SSB. HA DX Propozície contextualization najdete na http://www.ha-dx.com/HADX/

The second race will be held a week later, 24.-25.January 2009 from 13.00 to 13.00. The aim of the UBA Answer is to establish as many connections primarily with Belgian station. Force are also connections with other stations. Multipliers are the Belgian province, Belgian DXCC prefixes and ground of the European Union. Propositions UBA Contest, visit http://uba.be/hf_contests/rules/ubatest_dx.pdf 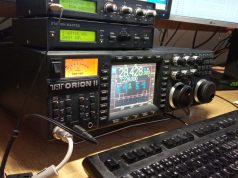