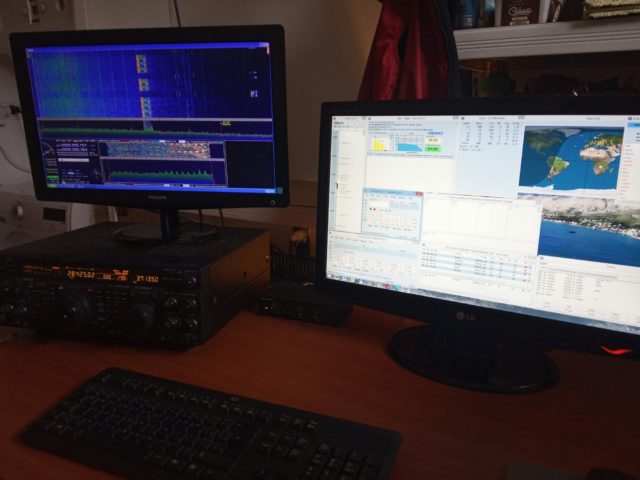 It is possible to contest without a mast and a proper antenna? This is an article, which I definitely do not recommend to owners of quality antenna systems and large output stages.

It started weeks earlier, when Oliver OM0RX started asking about it, how to participate in the CQ WW DX Contest at SSB and possibly CW. Because my QTH currently looks like a construction site, so I didn't take it very seriously. I underestimated his desire to contest, because as the race date approached, so he was reminded more and more often.

During the summer, I started preparing a mast from RDM-12. I sharpened it all, painted with primer (2x) and top (2x) and he wished, lest I make up such nonsense. It is very laborious and access to the inside of the mast is difficult for a steel brush or grinding wheels.. In addition, five pits were excavated. Fortunately, no longer by hand! Three already have anchor pipes concreted, one not yet. The main pit remains with a supporting structure and a lifting mechanism.

And since behind the house the garden is still being leveled, so Shrek's Swamp is a more pleasant place. But the word gave the word and I decided to add Diamond W-8010 antenna for a second set of arms, to make it available 5 band. Of course it didn't go well and it took two more evenings, while I tuned the antenna to each band.

My setup is quite classic, Yaesu FT-1000MP. I also have a homemade SDR panadapter and CAT connection via MicroHAM to a computer with a proven N1MM + logo. Because many things are still being done inside the house and the smallest HAM recently had a year, so we agreed, that it will be broadcast from the technical room. Transferring a desk there required the assistance of a screwdriver and an Allen key, but after a small match, the table was in place and the whole setup was involved the night before the contest.

Oliver started the race, OM0RX. In the morning, I just evaluated how he was doing or not. It's not funny, The W-8010 has a width of about 30 kHz in the 80m band. We pulled it through the tuner as much as we could. The Japanese designers shook hands with the Japanese antenna and stretched it around 160 kHz. Paradoxically, it also broadcast quite decently.

The signals in the higher bands were as auroral in color on Saturday morning. And of course, for most of them, 100W was not enough for that piece of wire. In the morning, however, the stations also showed up on the 10m band. The lesson spoke, that any such connection should be used, because the band may no longer be opened at all. On the whole, it went slowly on this band. It is strange to contest without the need to rotate the antenna. It will either pass or not. Although at DXm it was not possible to produce any DX stations (nieto NA), but a few dozen connections pleased him.

However, a little more unpleasant turned out to be 15m. Nevertheless, this band gives room to make a DX connection and obtain a valuable multiplier. Whether you hear UA9, JA or W station does not mean, that it can be invoked on them! Many other contestants have the same goal, who mostly use more efficient antennas or more power!

Why I don't like the multi-single category? For a 10-minute rule. I have seen many diaries in this category and have been violated many times. That's what he says, that in another band it is possible to make a connection only with respect to the multiplier. Well, let's say I make four connections there, so I reach the average 0,4 QSO / minute while I'm on 10 minutes "closed" without the possibility to increase this number in another band!

On the other hand, it is a challenge. The challenge is to know how to select the correct band or just "bounce" the multiplier. Only that bounce can last too 5 minutes (remember low power and weak antenna).

Oliver took over the night shifts in the lower bands, for which he deserves thanks. Without it, such a continuous broadcast would not be possible. Although it does not die during the contest, does not give birth or marry, but still there is a family around you and a 1-year-old radio amateur also wants to broadcast 🙂

The next day, we focused our efforts on raising the score at the expense of the connection. It meant invoking multipliers. What a joy to do NA at 15m! Or VY2ZM in pile-up stations! Fortunately, we didn't even hear many stations, so we didn't have to worry about that, that we will not appeal.

In the evening, we pushed the score over 300,000 points. The number of connections stopped at 1107. Online contestový server https://cqcontest.net/ he had some outages and therefore no longer see the end of the race in it.

Thank you very much, who caught our weak signal in a fascinating sea of ​​signals, thank you to my family for the space to realize our folly and birds good luck! 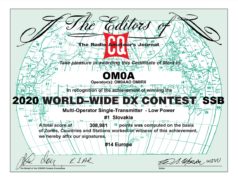 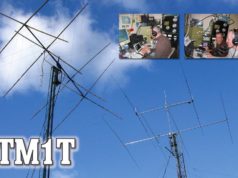